Dark energy is the name given to the unknown energy source that is causing our Universe’s expansion to accelerate.

Our Universe is expanding. One of the great mysteries of modern astronomy is that that expansion appears to be accelerating. The as yet unknown energy source causing this expansion is referred to as dark energy. Energy and mass are profoundly related to one another, as expressed by the well-known equation E = mc2. Therefore the composition of the Universe is often described by astronomers in terms of a quantity called the mass-energy density, as opposed to just mass alone. Incredibly, dark energy is believed to make up about 70% of the mass-energy density of the entire Universe. By studying dark energy, astronomers hope to gain a better understanding of both what it is and how it might affect the future of the Universe: whether the cosmos will continue expanding forever; whether it will reach a steady state; or if it will reverse course and head for a ‘Big Crunch’.

Hubble’s early observations helped astronomers to determine how fast the Universe is expanding over time. To their surprise, the data implied that the Universe had not been expanding at a constant rate, but instead is accelerating. Many scientists now believe this discovery can be explained by the existence of dark energy.

In 2016 astronomers used Hubble to measure the distances to stars in nineteen galaxies more accurately than previously possible. They found that the Universe is currently expanding faster than the rate derived from measurements of the Universe shortly after the Big Bang. Research is still ongoing, as this apparent inconsistency may be an important clue to understanding three of the Universe’s most elusive components: dark matter, dark energy and neutrinos. The team made this discovery by refining the measurement of how fast the Universe is expanding, a value called the Hubble constant, to unprecedented accuracy, reducing the uncertainty to only 2.4%. This is significant because before Hubble was launched in 1990, estimates of the Hubble constant varied by a factor of two. In the late 1990s, researchers refined the value of the Hubble constant to within 10%, accomplishing one of the telescope’s key goals. This latest research has reduced the uncertainty in the value of the Hubble constant to an unprecedented 1.9%.

By analysing the COSMOS survey – the largest ever survey undertaken with Hubble – an international team of scientists assembled one of the most important results in cosmology: a three-dimensional map that offers a first look at the web-like large-scale distribution of dark matter in the Universe. Tracing the growth of clustering in the dark matter in this way may also eventually shed light on dark energy.

In 2010 it was announced that an international team of astronomers had used gravitational lensing observations from Hubble to make an important step forward in the quest to solve the riddle of dark energy. Looking at the distorted images allows astronomers to reconstruct the path that light from distant galaxies takes on its long journey to Earth. It also lets them study the effect of dark energy on the geometry of space in the light path from distant objects to the lensing cluster and then from the cluster to us. As dark energy pushes the Universe to expand ever faster, the precise path that the light beams follow as they travel through space and are bent by the lens is subtly altered. This means that the distorted images from the lens encapsulate information about the underlying cosmology, as well as about the lens itself. 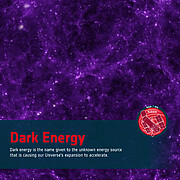 Dark Energy
Dark energy is the name given to the unknown energy source that is causing our Universe’s expansion to accelerate.