2021 was another busy year for the NASA/ESA Hubble Space Telescope.

In 2021 scientists throughout Europe published a large number of exciting new results. Of the various ESA/Hubble science releases published this year, some memorable scientific news that garnered particular public interest included Hubble’s evidence of volcanic activity reforming the atmosphere on a rocky planet around a distant star, the first evidence of water vapour on Jupiter’s moon Ganymede and the discovery of a persistent water vapour atmosphere on Europa. This year, an ESA/Hubble Picture of the Week also prompted new scientific understanding of a stunning Einstein Ring. After 31 years of operation, it’s staggering to consider the magnitude and impact of the telescope’s continuing output of breakthrough results. This also spurs us to imagine what scientific discoveries await us next year and beyond!

All of the many beautiful photo releases published this year have been popular with the public. Most notably, Hubble celebrated its 31st birthday with a giant star, AG Carinae, on the edge of destruction (a new perspective of the star was also published as a Picture of the Week in September). Hubble celebrated Halloween with a beautiful glowing carbon star, CW Leonis, and finished off 2021 with its annual tour of the outer Solar System. The ESA/Hubble Pictures of the Week were covered almost 50% more in the media in 2021 than in 2020.

2021 marked the 31st anniversary of the Hubble Space Telescope. ESA/Hubble uses each anniversary opportunity to develop special initiatives to engage and involve the public in this annual milestone. The various public engagement initiatives saw significant participation across Europe and worldwide. This includes the new ESA/Hubble GIPHY page that is averaging 15 000 to 25 000 views daily. In addition, a special Chrome browser tool was developed for users to enjoy the Top 100 Images collection while browsing the internet. Furthermore, a special Word Bank was developed and published by the ESA/Hubble team, which provides insightful explanations of various astronomical concepts and objects in simple language. 2021 also marked a unique collaboration between the ESA/Hubble outreach team and ESA Sky, which you can learn more about here.

Looking ahead to ESA/Hubble’s activities in 2022, our outreach team wants to continue to emphasise the role of ESA and the European astronomical community in the telescope’s continued success and the use of Hubble data by European institutions and scientists. As Chief Science Communications Officer, my primary goal is to promote the Hubble Space Telescope’s science for the European Space Agency in close collaboration with the ESA Project Scientist for Hubble. ESA/Hubble and ESAHubble.org can help Hubble scientists by producing and distributing press releases, image processing, web articles, artists’ impressions, and high-definition videos — like the 2021 release highlights mentioned above. If you think any aspect of your research could be of interest to the public at large, or your observations might produce an image suitable for public release, please get in touch so we can explore possible avenues for promoting your work! 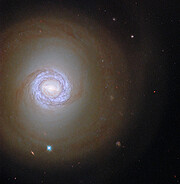