One of a Pair 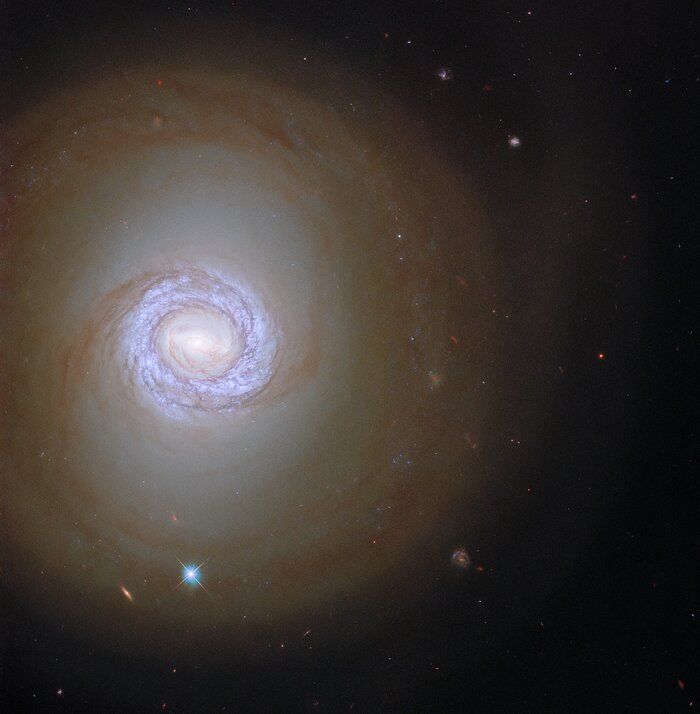 In this image the NASA/ESA Hubble Space Telescope peers into the spiral galaxy NGC 1317 in the constellation Fornax, more than 50 million light-years from Earth. This galaxy is one of a pair, but NGC 1317’s rowdy larger neighbour NGC 1316 lies outside Hubble’s field of view. Despite the absence here of its neighbouring galaxy, NGC 1317 is accompanied in this image by two objects from very different parts of the Universe. The bright point ringed with a criss-cross pattern is a star from our own galaxy surrounded by diffraction spikes, whereas the redder elongated smudge is a distant galaxy lying far beyond NGC 1317.

The data presented in this image are from a vast observing campaign of hundreds of observations from Hubble’s Wide Field Camera 3 and Advanced Camera for Surveys. Combined with data from the ALMA array in the Atacama desert, these observations help astronomers chart the connections between vast clouds of cold gas and the fiercely hot young stars that form within them. ALMA’s unparalleled sensitivity at long wavelengths identified vast reservoirs of cold gas throughout the local Universe, and Hubble’s sharp vision pinpointed clusters of young stars, as well as measuring their ages and masses.

Often the most exciting astronomical discoveries require this kind of telescope teamwork, with cutting-edge facilities working together and providing astronomers with information across the electromagnetic spectrum. The same applies to future telescopes, with Hubble’s observations laying the groundwork for future science with the NASA/ESA/CSA James Webb Space Telescope.