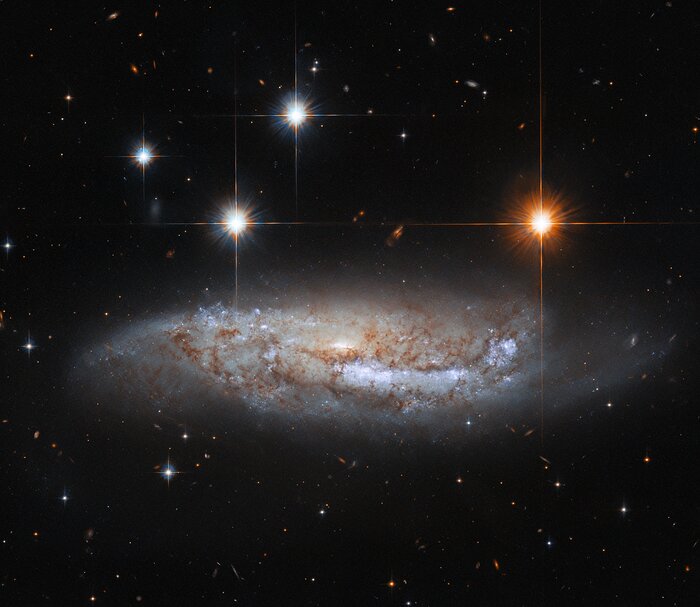 In this image, the NASA/ESA Hubble Space Telescope captures a side-on view of NGC 3568, a barred spiral galaxy roughly 57 million light-years from the Milky Way in the constellation Centaurus. In 2014 the light from a supernova explosion in NGC 3568 reached Earth — a sudden flare of light caused by the titanic explosion accompanying the death of a massive star. Whilst most astronomical discoveries are the work of teams of professional astronomers, this supernova was discovered by amateur astronomers from the Backyard Observatory Supernova Search in New Zealand. Dedicated amateur astronomers often make intriguing discoveries — particularly of fleeting astronomical phenomena such as supernovae.

This Hubble observation comes from a hoard of data built up to pave the way for future science with the upcoming NASA/ESA/CSA James Webb Space Telescope. By combining ground-based observations with data from Hubble’s Advanced Camera for Surveys and Wide Field Camera 3, astronomers have built a treasure trove of data on the connections between young stars and the clouds of cold gas in which they form. One of Webb’s key science goals is to explore the life cycle of stars — particularly how and where stars are born. Since Webb observes at infrared wavelengths, it will be able to peer through the clouds of gas and dust in stellar nurseries and observe the fledgling stars within. Webb’s superb sensitivity will even allow astronomers to directly investigate faint protostellar cores — the earliest stages of star birth.