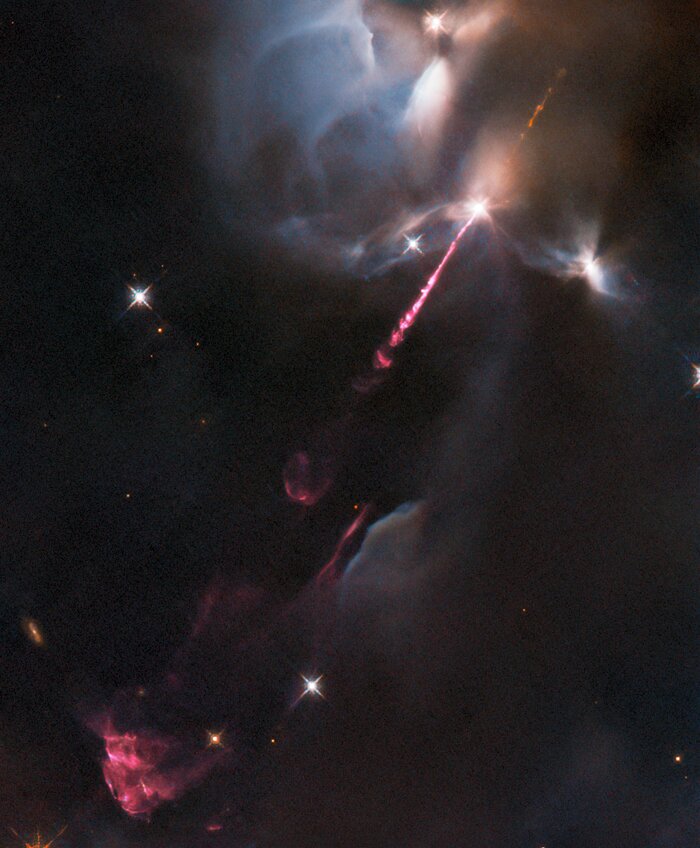 An energetic outburst from an infant star streaks across this image from the NASA/ESA Hubble Space Telescope. This stellar tantrum — produced by an extremely young star in the earliest phase of formation — consists of an incandescent jet of gas travelling at supersonic speeds. As the jet collides with material surrounding the still-forming star, the shock heats this material and causes it to glow. The result is the colourfully wispy structures, which astronomers refer to as Herbig–Haro objects, billowing across the lower left of this image.

Herbig–Haro objects are seen to evolve and change significantly over just a few years. This particular object, called HH34, was previously captured by Hubble between 1994 and 2007, and again in glorious detail in 2015. HH34 resides approximately 1250 light-years from Earth in the Orion Nebula, a large region of star formation visible to the unaided eye. The Orion Nebula is one of the closest sites of widespread star formation to Earth, and as such has been pored over by astronomers in search of insights into how stars and planetary systems are born.

The data in this image are from a set of Hubble observations of four nearby bright jets with the Wide Field Camera 3 taken to help pave the way for future science with the NASA/ESA/CSA James Webb Space Telescope. Webb — which will observe at predominantly infrared wavelengths — will be able to peer into the dusty envelopes surrounding still-forming protostars, revolutionising the study of jets from these young stars. Hubble’s high-resolution images of HH34 and other jets will help astronomers interpret future observations with Webb.