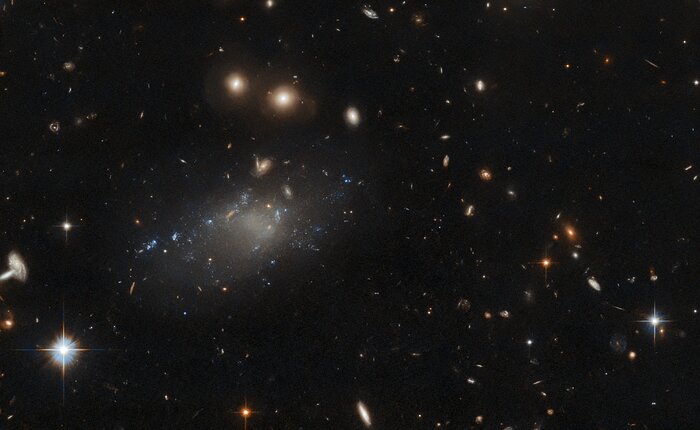 The ultra-diffuse galaxy GAMA 526784 appears as a tenuous patch of light in this image from the NASA/ESA Hubble Space Telescope. This wispy object resides in the constellation Hydra, roughly four billion light-years from Earth. Ultra-diffuse galaxies such as GAMA 526784 have a number of peculiarities. For example, their dark matter content can be either extremely low or extremely high — ultra-diffuse galaxies have been observed with an almost complete lack of dark matter, whereas others consist of almost nothing but dark matter. Another oddity of this class of galaxies is their anomalous abundance of bright globular clusters, something not observed in other types of galaxies.

Hubble captured GAMA 526784 with the Advanced Camera for Surveys (ACS), which was installed in 2002 by astronauts during Hubble Servicing Mission 3B. Since then, the instrument has played a pivotal role in some of Hubble’s most impressive scientific results, including capturing the Hubble Ultra Deep Field. The ACS has also photographed Pluto in advance of the New Horizon mission, observed gargantuan gravitational lenses and found fully formed galaxies in the early Universe.

This image comes from a set of Hubble observations designed to shed light on the properties of ultra-diffuse galaxies. Hubble’s keen vision allowed astronomers to study GAMA 526784 in high resolution at ultraviolet wavelengths, helping to gauge the sizes and ages of the compact star-forming regions studding the galaxy.