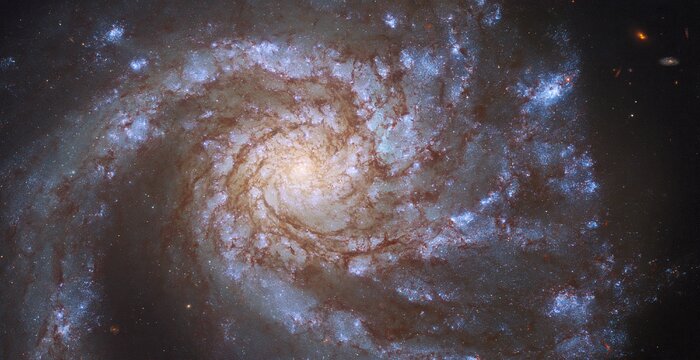 The first set of observations aimed to explore a gap between two different varieties of cosmic explosions; novae and supernovae. Novae, which are caused by the interactions between white dwarfs and larger stars in binary systems, are far less bright than the supernovae which mark the catastrophically violent deaths of massive stars. However, current astronomical theories predict that sudden, fleeting events could occur that shine with brightnesses between those of novae and supernovae. Despite being described by astronomers as being shrouded in mystery and controversy, just such an event was observed in M99. Astronomers turned to Hubble’s keen vision to take a closer look and precisely locate the fading source.

The second set of observations were part of a large Hubble project which aims to chart the connections between young stars and the clouds of cold gas from which they form. Hubble inspected 38 nearby galaxies, identifying clusters of hot, young stars. These galaxies were also observed by the Atacama Large Millimeter/submillimeter Array (ALMA), a colossal radio telescope consisting of 66 individual dishes perched high in the Chilean Andes. The combination of Hubble’s observations of young stars and ALMA’s insight into clouds of cold gas will allow astronomers to delve into the details of star formation, and paves the way for future science with the NASA/ESA/CSA James Webb Space Telescope.