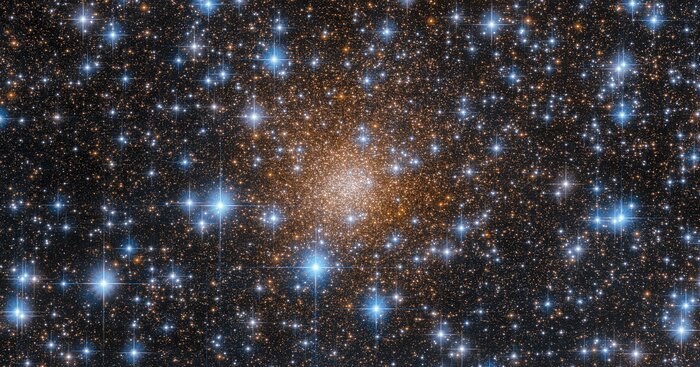 The muted red tones of the globular cluster Liller 1 are partially obscured in this image by a dense scattering of piercingly blue stars. In fact, it is thanks to Hubble’s Wide Field Camera 3 (WFC3) that we are able to see Liller 1 so clearly in this image, because the WFC3 is sensitive to wavelengths of light that the human eye cannot detect. Liller 1 is only 30 000 light-years from Earth — relatively neighbourly in astronomical terms — but it lies within the Milky Way’s ‘bulge’, the dense and dusty region at our galaxy’s centre. Because of that, Liller 1 is heavily obscured from view by interstellar dust, which scatters visible light (particularly blue light) very effectively. Fortunately, some infrared and red visible light are able to pass through these dusty regions. WFC3 is sensitive to both visible and near-infrared (infrared that is close to the visible) wavelengths, allowing us to see through the obscuring clouds of dust, and providing this spectacular view of Liller 1.

Liller 1 is a particularly interesting globular cluster, because unlike most of its kind, it contains a mix of very young and very old stars. Globular clusters typically house only old stars, some nearly as old as the Universe itself. Liller1 instead contains at least two distinct stellar populations with remarkably different ages: the oldest one is 12 billion years old and the youngest component is just 1-2 billion years old. This led astronomers to conclude that this stellar system was able to form stars over an extraordinary long period of time.