A Marvel of Galactic Morphology 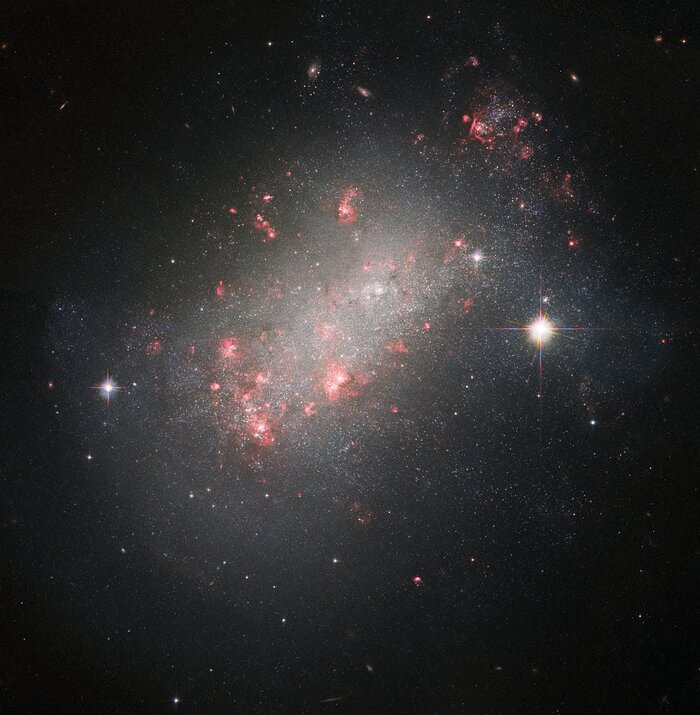 The galaxy featured in this Picture of the Week has a shape unlike many of the galaxies familiar to Hubble. Its thousands of bright stars evoke a spiral galaxy, but it lacks the characteristic ‘winding’ structure. The shining red blossoms stand out as well, twisted by clouds of dust — these are the locations of intense star formation. Yet it also radiates a diffuse glow, much like an elliptical galaxy and its core of older, redder stars. This galactic marvel is known to astronomers as NGC 1156.

NGC 1156 is located around 25 million light-years from Earth, in the constellation Aries. It has a variety of different features that are of interest to astronomers. A dwarf irregular galaxy, it’s also classified as isolated, meaning no other galaxies are nearby enough to influence its odd shape and continuing star formation. The extreme energy of freshly formed young stars gives colour to the galaxy, against the red glow of ionised hydrogen gas, while its centre is densely-packed with older generations of stars.

Hubble has captured NGC 1156 before — this new image features data from a galactic gap-filling programme simply titled “Every Known Nearby Galaxy”. Astronomers noticed that only three quarters of the galaxies within just over 30 million light-years of Earth had been observed by Hubble in sufficient detail to study the makeup of the stars within them. They proposed that in between larger projects, Hubble could take snapshots of the remaining quarter — including NGC 1156. Gap-filling programmes like this one ensure that the best use is made of Hubble’s valuable observing time.