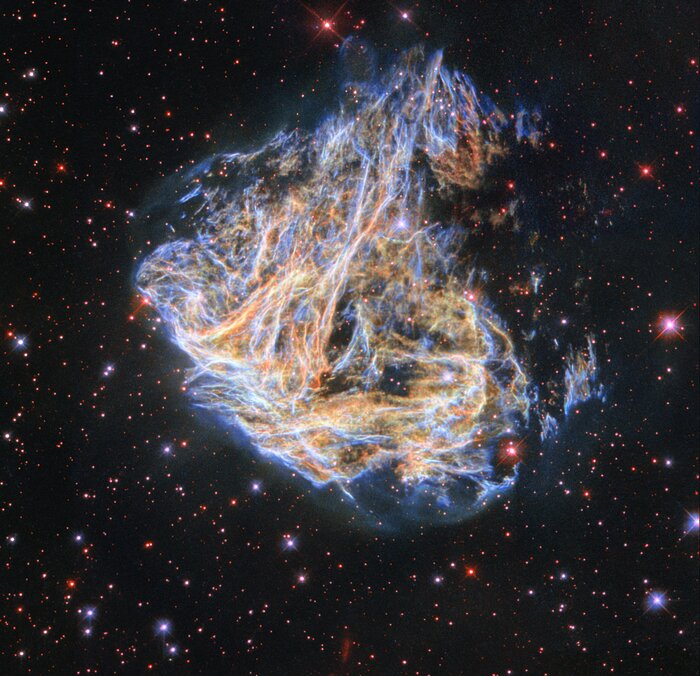 Shreds of the luridly coloured supernova remnant DEM L 190 seem to billow across the screen in this image from the NASA/ESA Hubble Space Telescope. The delicate sheets and intricate filaments are debris from the cataclysmic death of a massive star that once lived in the Large Magellanic Cloud, a small satellite galaxy of the Milky Way. DEM L 190 — also known as LMC N49 — is the brightest supernova remnant in the Large Magellanic Cloud and lies approximately 160 000 light-years away from Earth in the constellation Dorado.

This striking image was created with data from two different astronomical investigations, using one of Hubble’s retired instruments, the Wide Field Planetary Camera 2 (WFPC2). This instrument has since been replaced by the more powerful Wide Field Camera 3, but during its operational lifetime it contributed to cutting-edge science and produced a series of stunning public outreach images. The first of the two WFPC2 investigations used DEM L 190 as a natural laboratory in which to study the interaction of supernova remnants and the interstellar medium, the tenuous mixture of gas and dust that lies between stars. In the second project, astronomers turned to Hubble to pinpoint the origin of a Soft Gamma-ray Repeater, an enigmatic object lurking in DEM L 190 which repeatedly emits high-energy bursts of gamma rays.

This is not the first image of DEM L 190 to be released to the public — a previous Hubble portrait of this supernova remnant was published in 2003. This new image incorporates additional data and improved image processing techniques, making this spectacular celestial fireworks display even more striking!

[Image description: A supernova remnant, in the shape of a flame, occupies the centre and top. It is made of many long strands and thin layers of gas, that brightly glow orange and blue. Faint gas clouds outline its edges. It is surrounded by several scattered blue and red stars, and the background is black and filled with small red stars.]