Hubble’s instruments have provided detailed views of circumstellar discs, allowing astronomers to study these regions and the process of planet formation. For example, Hubble’s observations of the star HD 141569A gave astronomers their clearest view yet of the dust disc around the 5-million-year-old star that lies 320 light-years away. When studying the disc of TW Hydrae, a visible gap in the disc was apparent. This was best explained as being due to the effects of a growing, unseen planet that is gravitationally sweeping up material and carving out a lane in the disc, like a snow plough. As is done for the study of many circumstellar discs, Hubble made use of Hubble’s NICMOS instrument to block out TW Hydrae’s bright light so that the disc's structure could be seen. The telescope also observed the discs of HD 141943 and HD 191089, which were uncovered in archival Hubble images. 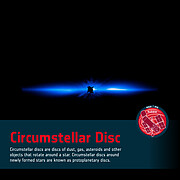