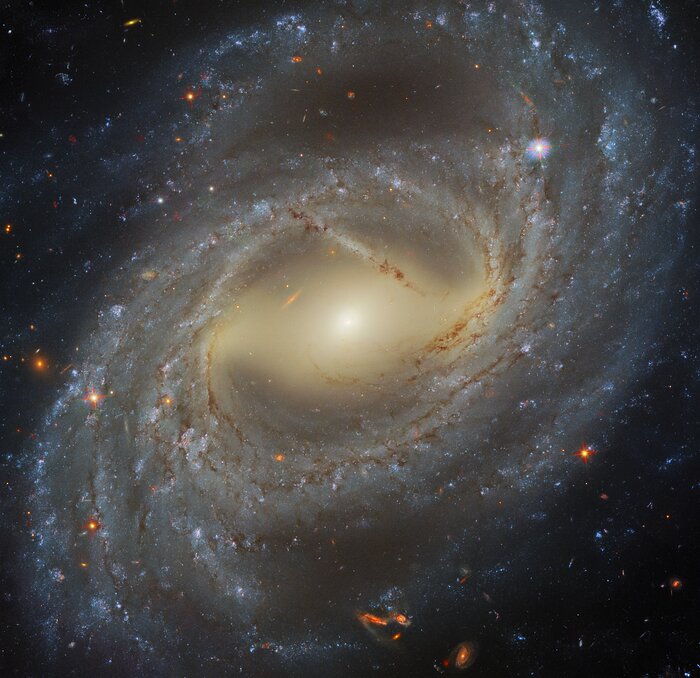 This stellar whirlpool is a spiral galaxy named NCG 7329, which has been imaged by Hubble’s Wide Field Camera 3 (WFC3). Creating a colourful image such as this one using a telescope such as Hubble is not as straightforward as pointing and clicking a camera. Commercial cameras will typically try to collect as much light of all visible wavelengths as they can, in order to create the most vibrant images possible. In contrast, raw images collected by Hubble are always monochromatic, because astronomers typically want to capture very specific ranges of wavelengths of light at any time, in order to do the best, most accurate science possible. In order to control which wavelengths of light will be collected, Hubble’s cameras are equipped with a wide variety of filters, which only allow certain wavelengths of light to reach the cameras’ CCDs (a CCD is a camera’s light sensor — phone cameras also have CCDs!).

How are the colourful Hubble images possible given that the raw Hubble images are monochromatic? This is accomplished by combining multiple different observations of the same object, obtained using different filters. This image, for example, was processed from Hubble observations made using four different filters, each of which spans a different region of the light spectrum, from the ultraviolet to optical and infrared. Specialised image processors and artists can make informed judgements about which optical colours best correspond to each filter used. They can then colour the images taken using that filter accordingly. Finally, the images taken with different filters are stacked together, and voila! The colourful image of a distant galaxy is complete, with colours as representative of reality as possible.