Europa — one of Jupiter’s 79 moons — is both the sixth closest moon to Jupiter and the sixth largest moon in the Solar System. It is an icy orb larger than the dwarf planet Pluto with a smooth, icy surface scarred by cracks and fissures. The surface of the moon is a bleak environment with an average temperature of −170 °C and only a tenuous atmosphere. However, astronomers suspect that Europa harbours a vast ocean underneath its icy surface, which some scientists speculate could host extraterrestrial life [1]. Now, for the first time, an astronomer has discovered evidence for persistent water vapour in the atmosphere of Europa.

Using a technique that recently resulted in the discovery of water vapour in the atmosphere of Jupiter’s moon Ganymede, an astronomer has found evidence of water in Europa’s trailing hemisphere — the portion of the moon that is always opposite to its direction of motion [2]. The asymmetric distribution of water vapour was predicted by previous studies based on computer simulations, but had not previously been detected observationally.

“The observation of water vapour on Ganymede and on the trailing side of Europa advances our understanding of the atmospheres of icy moons,” commented Lorenz Roth of the KTH Royal Institute of Technology in Stockholm, Sweden, the author of this study. “The detection of a stable H2O abundance on Europa is surprising because the surface temperatures are so low.”

To make this discovery, Roth delved into archival Hubble datasets, selecting ultraviolet observations of Europa from 1999, 2012, 2014 and 2015 while the moon was at various orbital positions. These observations were all taken with one of Hubble’s most versatile instruments — the Space Telescope Imaging Spectrograph (STIS). These ultraviolet STIS observations allowed Roth to determine the abundance of oxygen — one of the constituents of water — in Europa’s atmosphere, and by interpreting the strength of emission at different wavelengths he was able to infer the presence of water vapour.

Previous observations of water vapour on Europa have been associated with transient plumes erupting through the ice, analogous to geysers here on Earth but more than 100 kilometres high. The phenomena seen in these plume studies were apparently transient inhomogeneities or blobs in the atmosphere. The new results, however, show similar amounts of water vapour to be present spread over a larger area in observations spanning from 1999 to 2015. This suggests the long-term presence of a water vapour atmosphere on Europa’s trailing hemisphere. Despite the presence of water vapour on Europa’s trailing hemisphere there is no indication of H2O on the leading hemisphere of Europa.

Space scientists working to understand these icy moons will soon be able to benefit from a close-up view. ESA’s  JUpiter ICy moons Explorer (JUICE) mission is being prepared for a tour of Ganymede, Callisto and Europa, Jupiter’s three largest icy moons. JUICE is the first large-class mission in ESA's Cosmic Vision 2015–2025 programme and is expected to launch in 2022 and arrive at Jupiter in 2031. The probe will carry an advanced suite of instruments — the most powerful remote sensing payload ever flown to the outer Solar System — and will spend at least three years making detailed observations of the Jovian system. Europa will also be visited by a NASA mission, Europa Clipper, which will perform a series of flybys of the moon and investigate its habitability, as well as selecting a landing site for a future mission.

“This result lays the groundwork for future science based on upcoming missions to the Jovian moons,” concluded Roth. “The more we can understand about these icy moons before spacecraft like JUICE and Europa Clipper arrive, the better use we can make of our limited observing time within the Jovian system.”

This discovery and the insights from upcoming missions such as JUICE will improve our understanding of potentially habitable environments in the Solar System. Understanding the formation and evolution of Jupiter and its moons also helps astronomers gain insights into Jupiter-like exoplanets around other stars. Combined with observations from space telescopes such as the upcoming NASA/ESA/CSA James Webb Space Telescope, this could help astronomers determine if life could emerge in Jupiter-like exoplanetary systems elsewhere in the universe.

[1] Liquid water is a crucial ingredient in the complex chemistry that underpins all known forms of life. Europa’s subsurface ocean is warmed not by sunlight, but rather by the subtle flexing of the moon caused by Jupiter’s immense gravitational field. The presence of liquid water and a source of energy make Europa one of the most likely locations in the Solar System for potential habitability.

[2] Europa is tidally locked, which means that it takes the same amount of time to revolve on its own axis as it does to orbit Jupiter. This means that the same hemisphere of Europa always faces Jupiter, and that the same hemisphere of the moon is always facing away from the direction that Europa is travelling along its orbit. Earth’s Moon is also tidally locked, which is why we always see the same face of the Moon in the night sky.

The astronomer who carried out this study was Lorenz Roth of the Royal Institute of Technology, Space and Plasma Physics, Sweden.

These results have been published in the journal Geophysical Research Letters. 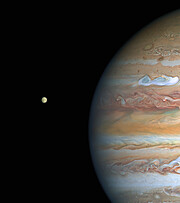