An international team of astronomers using archival data from the NASA/ESA Hubble Space Telescope and other space- and ground-based observatories have discovered a unique object in the distant, early Universe that is a crucial link between star-forming galaxies and the emergence of the earliest supermassive black holes. This object is the first of its kind to be discovered so early in the Universe’s history, and had been lurking unnoticed in one of the best-studied areas of the night sky.

Astronomers have struggled to understand the emergence of supermassive black holes in the early Universe ever since these objects were discovered at distances corresponding to a time only 750 million years after the Big Bang [1]. Rapidly growing black holes in dusty, early star-forming galaxies are predicted by theories and computer simulations but until now they had not been observed. Now, however, astronomers have reported the discovery of an object — which they name GNz7q — that is believed to be the first such rapidly growing black hole to be found in the early Universe. Archival Hubble data from the Advanced Camera for Surveys helped the team study the compact ultraviolet emission from the black hole's accretion disc and to determine that GNz7q existed just 750 million years after the Big Bang.

“Our analysis suggests that GNz7q is the first example of a rapidly-growing black hole in the dusty core of a starburst galaxy at an epoch close to the earliest super massive black hole known in the Universe,” explains Seiji Fujimoto, an astronomer at the Niels Bohr Institute of the University of Copenhagen in Denmark and lead author of the paper describing this discovery. “The object’s properties across the electromagnetic spectrum are in excellent agreement with predictions from theoretical simulations.”

Current theories predict that supermassive black holes begin their lives in the dust-shrouded cores of vigorously star-forming “starburst” galaxies before expelling the surrounding gas and dust and emerging as extremely luminous quasars. Whilst they are extremely rare, examples of both dusty starburst galaxies and luminous quasars have been detected in the early Universe. The team believes that GNz7q could be the “missing link” between these two classes of objects.

Whilst other interpretations of the team’s data cannot be completely ruled out, the observed properties of GNz7q are in strong agreement with theoretical predictions. GNz7q’s host galaxy is forming stars at the rate of 1600 solar masses of stars per year [2] and GNz7q itself appears bright at ultraviolet wavelengths but very faint at X-ray wavelengths. The team have interpreted this — along with the host galaxy’s brightness at infrared wavelengths — to suggest that GNz7q is harbors a rapidly growing black hole still obscured by the dusty core of its accretion disc at the center of the star-forming host galaxy.

As well as GNz7q’s importance to the understanding of the origins of supermassive black holes, this discovery is noteworthy for its location in the Hubble GOODS North field, one of the most highly scrutinised areas of the night sky [3].

“GNz7q is a unique discovery that was found just at the centre of a famous, well-studied sky field — showing that big discoveries can often be hidden just in front of you,” commented Gabriel Brammer, another astronomer from the Niels Bohr Institute of the University of Copenhagen and a member of the team behind this result. “It’s unlikely that discovering GNz7q within the relatively small GOODS-N survey area was just ‘dumb luck’ rather the prevalence of such sources may in fact be significantly higher than previously thought.”

Finding GNz7q hiding in plain sight was only possible thanks to the uniquely detailed, multi-wavelength datasets available for GOODS-North. Without this richness of data GNz7q would have been easy to overlook, as it lacks the distinguishing features usually used to identify quasars in the early Universe. The team now hopes to systematically search for similar objects using dedicated high-resolution surveys and to take advantage of the NASA/ESA/CSA James Webb Space Telescope's spectroscopic instruments to study objects such as GNz7q in unprecedented detail.

“Fully characterising these objects and probing their evolution and underlying physics in much greater detail will become possible with the James Webb Space Telescope.” concluded Fujimoto. “Once in regular operation, Webb will have the power to decisively determine how common these rapidly growing black holes truly are.”

[1] Whilst light travels imperceptibly quickly in day-to-day life, the vast distances in astronomy mean that as astronomers look at increasingly distant objects, they are also looking backwards in time. For example, light from the Sun takes around 8.3 minutes to reach Earth, meaning that we view the Sun as it was 8.3 minutes ago. The most distant objects are the furthest back in time, meaning that astronomers studying very distant galaxies are able to study the earliest periods of the Universe.

[2] This does not mean that 1600 Sun-like stars are produced each year in GNz7q’s host galaxy, but rather that a variety of stars are formed each year with a total mass 1600 times that of the Sun.

[3] GOODS — the Great Observatories Origins Deep Survey — is an astronomical survey that combines multi-wavelength observations from some of the most capable telescopes ever built, including Hubble, ESA's Herschel and XMM-Newton space telescopes, NASA’s Spitzer Space Telescope and Chandra X-ray Observatory, and powerful ground-based telescopes.

These results have been published in Nature. 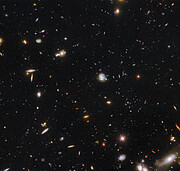