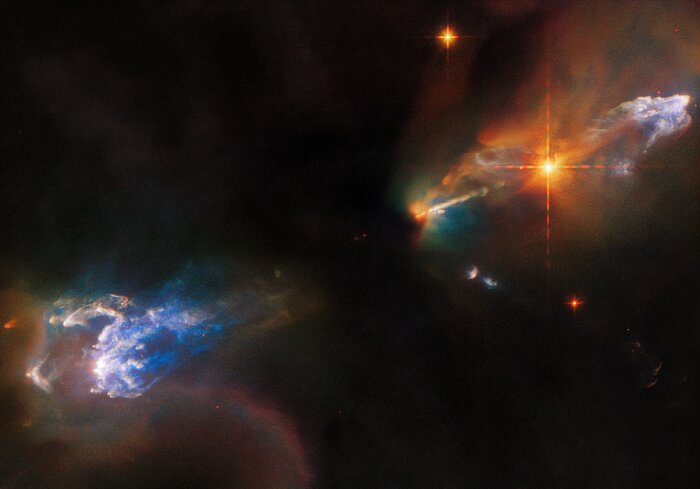 The lives of newborn stars are tempestuous, as this image of the Herbig–Haro objects HH 1 and HH 2 from the NASA/ESA Hubble Space Telescope depicts. Both objects are in the constellation Orion and lie around 1250 light-years from Earth. HH 1 is the luminous cloud above the bright star in the upper right of this image, and HH 2 is the cloud in the bottom left. While both Herbig–Haro objects are visible, the young star system responsible for their creation is lurking out of sight, swaddled in the thick clouds of dust at the centre of this image. However, an outflow of gas from one of these stars can be seen streaming out from the central dark cloud as a bright jet. Meanwhile, the bright star between that jet and the HH 1 cloud was once thought to be the source of these jets, but it is now known to be an unrelated double star that formed nearby.

Herbig–Haro objects are glowing clumps found around some newborn stars, and are created when jets of gas thrown outwards from these young stars collide with surrounding gas and dust at incredibly high speeds. In 2002 Hubble observations revealed that parts of HH 1 are moving at more than 400 kilometres per second!

This scene from a turbulent stellar nursery was captured with Hubble’s Wide Field Camera 3 using 11 different filters at infrared, visible, and ultraviolet wavelengths. Each of these filters is sensitive to just a small slice of the electromagnetic spectrum, and they allow astronomers to pinpoint interesting processes that emit light at specific wavelengths.

In the case of HH 1/2, two groups of astronomers requested Hubble observations for two different studies. The first delved into the structure and motion of the Herbig–Haro objects visible in this image, giving astronomers a better understanding of the physical processes occurring when outflows from young stars collide with surrounding gas and dust. The second study instead investigated the outflows themselves to lay the groundwork for future observations with the NASA/ESA/CSA James Webb Space Telescope. Webb, with its ability to peer past the clouds of dust enveloping young stars, will revolutionise the study of outflows from young stars.

[Image description: Two wispy, gaseous clouds occupy the corners of this image, HH 1 in the upper right, and HH 2 in the lower left. Both are light blue and surrounded by dimmer multi-coloured clouds, while the background is dark black due to dense gas. A very bright orange star lies just to the lower left of HH 1, and beyond that star is a narrow jet, emerging from the dark centre of the field.]

ESA/Hubble & NASA, B. Reipurth, B. Nisini